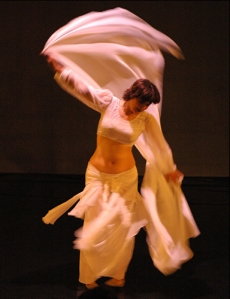 Since the beginning of time people have danced.  Every culture on the planet has embraced dance as part of their ritual traditions, in celebration, as a form of worship, or for the sheer pleasure of surrendering the body.  The ancients danced to embody spirit, to know oneness and unity with Source, to lose themselves in the powerful rhythmic beats that could induce ecstatic states of trance. They would combine dance with breath to reach altered states of consciousness, shifting focus from the mundane world into worship of the Divine.

The ancient temples of the goddess celebrated the sacred feminine and would utilise the power of dance as a form of worship and often this dance was sensual, sexual, as is the nature of women.  We have all heard of the dance of “the dance of the seven veils” which is believed to be the dance that Salome performed for her stepfather, Herod, in order to seduce him. The dancer begins wearing seven veils and removes them one by one as she dances, often, but not always, ending the dance nude or nearly so. In the modern Western world, this dance has also been associated with striptease where dance has been the vehicle for erotic celebration of the female form.  (For those who know the story of Inanna’s descent into the underworld the dance of the seven veils is also used as a metaphor for enlightenment, shedding ‘veils’ of illusion on the path to deeper spirituality and self-realization.)

The Devadasi were the young Hindu maidens married to a god in the temple system of ancient India.  They were the sacred prostitutes and had a long dance tradition performing rituals that became an integral part of temple worship.  There was a hugely seductive and sexual component associated with the devadasi, whereby the dancer in states of trance, became the vessel for the goddess to enter her body, performing the sinuous, undulating movements of the rising kundalini serpent.

Many say that belly dancing is the oldest form of dance, having roots in all ancient cultures from the orient to India to the middle-East.  Probably the greatest misconception about belly dance is that it is intended to entertain men. Throughout history, this dance form has usually been performed for women, generally during fertility rites or celebrations preparing a young woman for marriage.  In most cases, the presence of men was not permitted.

Belly dance is natural to a woman’s bone and muscle structure with movements emanating from the torso rather than the legs and feet. The dance often focuses upon isolating different parts of the body, moving them independently in sensuous patterns, using the arms and hands to weave together the entire feminine form.  Generally performed barefoot, belly dance is thought to emphasize the intimate physical connection between the dancer, her body, and Mother Earth.

And this is what happens to women when they dance, they portray the sensuality of

their feminine essence as it expresses through the body, riding the energies of the beat, losing themselves in the rhythm, letting go of the mind so that the body can express itself in the divine art of movement.

Shakti is an eastern term used to describe the sacred feminine life force that all women carry.  Shakti literally means creative energy and power and is sometimes referred to as the Great Divine Mother, the original force behind the creation of the Universe.  This energy lies in the womb and the yoni, wrapped around the sacrum and hips and when women dance, they can awaken this powerful life force and unleash it throughout the body.  When women consciously dance to connect with the kundalini shakti, to deeply breath and raise energy, it is then that the dance can become an act of worship as it did in many ancient cultures, as it did in the temples of the goddess.  By opening the chakras and breathing energy up and through the body, the dancer can enter into ecstatic states of trance that can lead to full body orgasm, guiding the dancer into deeper connection with body and soul.

And so once again, we have been called to dance.  We have been experiencing an incredible revival in Western society of our natural desire to dance.  The Christian religion shut it down because those who danced had a direct link to God and this threatened the role of the priests and ultimately the power of the Church.  Now we know why, because something happens to us when we dance; we can feel its power freeing our soul, abandoning our conditioning and shutting down the mind.  Here we 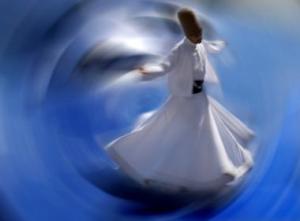 trust the natural wisdom of the body as it moves to the call of a divine rhythm and we cross a bridge into the ecstasy of direct communion with source.

We have so much ancient wisdom in the cells of our bodies and the potential for unleashing it becomes available, if we just allow ourselves to dance.

About:  Kerri is a modern day priestess, a writer, a workshop facilitator, and a teacher of the sacred feminine. Having experienced the transcendent states available through sacred sex, she seeks to share the knowledge that the goddess brings when she enters the bodies and lives of those who carry her flame. With a passion for the ritual and ceremony of earth based goddess religion, she seeks to promote the blossoming of awakened consciousness through the union of sacred masculine and feminine energies. With a Masters degree in Religions Studies, she is currently penning her first book on a past lifetime in the goddess temples of ancient Jordan.

5 thoughts on “Dancing the divine”