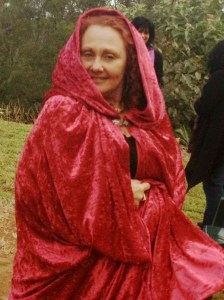 As Priestess of Inanna, initiated into her worship, she calls from the great beyond, reminding me why she was so loved and adored for thousands of years as she incarnated into Ishtar, Astarte, Ashtoreth, Neith, Metis, and Cybele down through time and cultures into Isis and even Aphrodite.  The worship of this great goddess crossed millennia and cultures much like Christianity does today and the traits of such a powerful and adored Goddess as Inanna still speak to us as the sacred feminine is rebirthed once again in a modern era.

At her peak in ancient Mesopotamia around 5,000 to 2,000 BCE, (now known as modern day Iraq), the first great urban centre emerged, and with it, the cuneiform or wedge shaped system of writing on clay tablets which was Sumer’s greatest gift to modern civilisation.  Inanna was known as Queen of Heaven and Earth, Goddess of gentle rains and terrible floods, Goddess of the morning and evening star, Queen of the land and its fertility, bestowing kingship on her chosen mortals. She was the Goddess of war and equally passionately, the Goddess of sexual love. Far more extroverted than Aphrodite, Inanna celebrated her vulva and the sex act and below is one of the most quoted hymns of the bridal songs, where Inanna calls out to her lover the shepherd King Dumuzi: 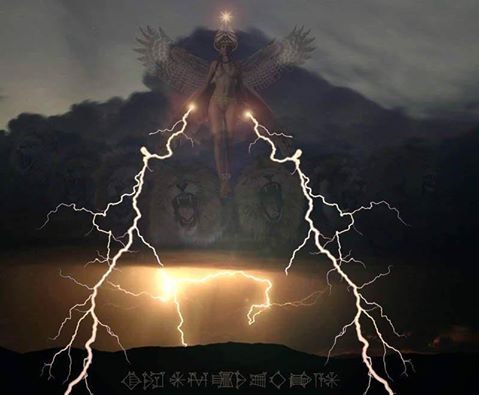 My vulva, the horn,

The Boat of Heaven,

As for me, Inanna,

Who will plow my high field?

Who will plow my wet ground?

As for me, the young woman,

Who will station the ox there?

This hymn explains the openness of sexuality expressed in the writings of the Goddess and paints a picture of how liberally sexuality was viewed. Inanna’s vulva is often called the “holy lap” and is used as an adjective that is applied to numerous other deities, temples, places and artefacts and is usually translated as “pure” or “holy”.  Inanna was said to have used her vulva and the power associated with it, to further the prestige and divine status of her city.  I’m having trouble seeing our past Prime Minister Julia Gillard call upon the power of her vulva to promote Australia at international conferences, for this would be a modern analogy.  But such was the acknowledged power of fertility and sexuality attributed to the feminine 6000 years ago in goddess culture. 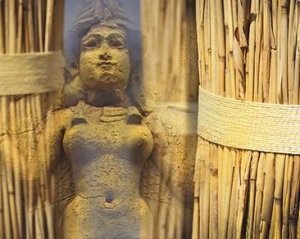 Inanna is also credited with installing the true gifts of civilisation – she is a turning point for arts and culture, literally transforming the consciousness of that era.  These gifts were handed down from the God Enki and called ‘The Me’ and they are the holy laws of heaven and earth which she gifted to all humankind. The Me were a set of universal and indisputable rules which must be observed by human and god alike. The Me include monarchy, priesthood, truth, garments, tools, art of love making, speech, music and song, power and treachery, deceit, travel, kindness, writing, attention, fear, dismay, judgment, decision-making, allure, and the arts of women.  Covering all aspects of life, Inanna truly brought civilisation to this region that together with the invention of writing truly advanced humanity.

But the famous story which was inscribed on clay tablets at around 1750BCE, describes the goddess’ descent into the underworld, providing us with a testimony to an early religion in which the goddess, the feminine was central.  And this religion, this worship was the forerunner for the archetype of death and resurrection that has been seen not only in Christianity, for we think that Christ was the only one to die on the cross and be reborn.  No, the resurrection of deity can be found in the Egyptian myths of Isis and Osiris and Ra the Sun God, as well as many examples in the ancient Near Eastern and Greek deities such as Dionysis, Baal, Adonis, Attis, Dumuzzi, Asclepius, and Orpheus, as well as the Norse Odin and of course, Jesus Christ – and not forgetting the female deities of Inanna/Ishtar as well as Persephone.

Inanna’s descent into the Underworld delivers a profound psychological and contemporary message that is characteristic of all archetypal journeys of death and resurrection.  As she descends through the seven gates she discards her clothing jewellery, sceptre and all signatures of her Queenhood until finally she is naked and unadorned before her sister Ereshkigal – Queen of the Underworld.  This shedding is a metaphor for the divestment of old values, belief systems and the ego.  The story of her return from the dead, after she had been slain and her corpse hung on a meat hook in the bowels of Hades, provides salvation in the form of resurrection, rebirth and renewal. 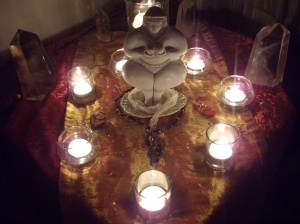 Any individual who has journeyed into the dark, lost themselves to the light and found themselves in total despair and grief will recognise the power of walking through the valley of the shadow of death, only to emerge once more, stripped of the old and reborn to a new level of awareness, forgiveness and understanding.  Whether we undertake this journey through enforced outer conditions such as the death of a family member, accident or illness, or whether we journey fully conscious into the dark, aware that we must shed all our illusions, all that no longer serves us, in order to be reborn, will recognise the power of Inanna’s journey.  Please find her story and read it, and remember perhaps a time in your own life when you found yourself in the pit of hell and made your way back to the light, only to find a stronger and more evolved version of self.  Or perhaps you didn’t make it back and were broken and are still wandering aimlessly in dark unresolved pain and blame – many are.

It might also be pertinent to ponder the idea that our planet and all of its citizens are currently in the process of making their descent to the underworld, releasing traditional paradigms and outmoded patriarchal belief systems in preparation for a period of cleansing, rebirth and accelerated growth where the feminine can hold hands with the masculine in balanced union as a way forward.  Indeed, I think this is absolutely what is currently happening.  Many will agree these so called “end times” are indeed about the process of resurrecting a new era on the planet, one that we can be conscious contributors to in love. 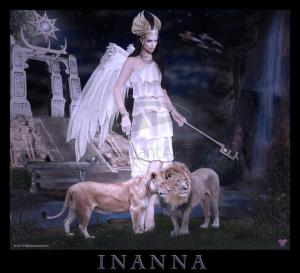 But I have a personal relationship with Inanna, I am her priestess, initiated into her teachings, channelling her sacred word, and she guides my hand and my heart.  She whispers that there is indeed a new wave of energy enveloping the Earth, a time where we revel in our bodies and our sexual expression as something sacred instead of profane.  Like in her temples of old where the rituals of Hieros Gamos (sacred marriage) were performed, the awareness that conscious engagement in sex becomes a pathway to access the divine and an act of sacred worship, will once again become common knowledge.  The Goddess Inanna speaks not just about the sexual emancipation of women, but the freedom of society as a whole from judging sex and our bodies as something dirty or profane.  When we can cast off the heinous residue of Christian dogma that has instilled such a powerful judgment around the most beautiful gift we possess – that of our sacred sexual being – then indeed we will have resurrected, just as did Inanna from the bowels of the underworld, to create anew.

We have all walked through the 12:12 gateway in December 2012 and we are all rebirthing right along with the planet.  Let your intentions be ones of peace and love expressed through the union of sacred masculine and feminine sexual energies for self healing together with this great blue planet that so many love so dearly.

Blessed be; and so it is.

Kerri is a modern day priestess, a writer, a workshop facilitator, and a teacher of the sacred feminine. Having experienced the transcendent states available through sacred sex, she seeks to share the knowledge that the goddess brings when she enters the bodies and lives of those who carry her flame. With a passion for the ritual and ceremony of earth based goddess religion, she seeks to promote the blossoming of awakened consciousness through the union of sacred masculine and feminine energies. With a Masters degree in Religions Studies, she is currently penning her first book on a past lifetime in the goddess temples of ancient Jordan.

6 thoughts on “Goddess Inanna, Queen of Heaven and Earth” 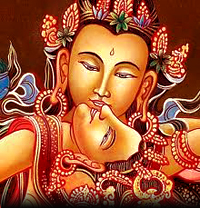