A long time ago before we worshipped a god in the sky, most cultures across the planet worshipped a goddess.  The Great Mother Goddess was seen as the sacred made imminent in the natural world, expressed in the diversity of all forms of life and death, in alignment with the cycles and seasons of the earth – she was mother nature.  Women’s bodies were able to perform acts of creation in the form of birth.  This creation was mirrored in the animals and the crops and the ancient ones recognized that women’s bodies were a vehicle for new life and as such, were deemed sacred. 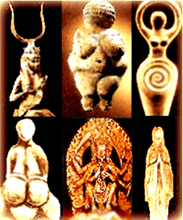 Prehistoric artefacts including statues of fertility goddesses and painted feminine images in caves and on pots attest to the worship of the feminine mother principle across a great many cultures from Old Europe to the Indus Valley.  Archaeologists who discovered statues and rock carvings such as the Neolithic Venus of Willendorf, propose that a Great Mother Goddess was worshipped as far back as 40,000 BCE and that society acknowledged the goddess as the source of creation, the font from which all life emanated.

Yes folks, god was a woman!

In the ancient temples of the goddess, the Sacred Prostitute was a priestess highly trained and skilled in the arts of sexuality and pleasure.  Because sex was viewed as a natural and joyous act which brought forth new life and mirrored the fertility of the earth, there was no shame in sexuality. Men sought out the sacred priestesses of the temple because it was understood that this sexual act was an act of worship of the goddess, where the priestess became the vessel into which the goddess entered and the resultant coupling could produce transcendent states of ecstasy.  For this honour men paid the temple well.

Today we have a profound difficulty in associating the profession of the prostitute with anything vaguely associated with sacredness, but in ancient times these women were held in the highest esteem in the temples of the Goddess. The sacred prostitute or temple priestess became the representation of the goddess in physical form and with their bodies entered into sacred sexual rituals with the men who came to worship.  Viewing sex then as a sacrament through which the divine is accessed, aids in understanding how vastly different attitudes towards sexuality were in our ancient past compared to patriarchal religious ideology today. 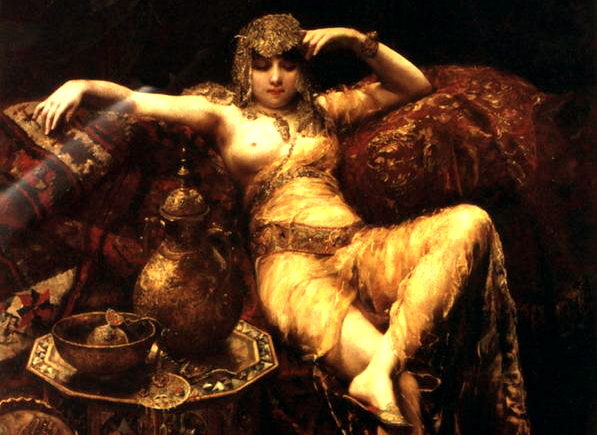 The practice of sacred sexual intercourse within the temples of Innana and Ishtar were important and common rituals in Mesopotamia and were understood to reinvigorate the land with divine fertile energy.  The priestesses of the temple took the title of “Hierodule of Heaven” which meant ‘servant of the holy’ and it was a great honour to make love within the precincts of the goddess.

In Babylon there was a hierarchy of prostitutes from the high-ranking priestesses known by various names including qadishtu, naditu or entu, right down to the tavern or street whore called harimtu.  Ishtar did not differentiate in bestowing her blessings and honoured the sexual act howsoever it be performed.  “Who will plough my vulva?” calls Inanna in the old hymns…”Who will water the holy lap?”  The power of the feminine, embodied in the sexuality of all women both made the earth grow and was a power for transformation

The Sumerian and Babylonian temple records indicate that the Qadishtu who served in the temples of Inanna/Ishtar were often from wealthy families. They owned properties and land and engaged in extensive business activities.  Matrilineal kinship customs also indicate that children born to Qadishtu would inherit title, names and property from their mothers with daughters having access to attain the status of Qadishtu themselves. Merlin Stone further explains that although the title of Qadishtu translates literally as “sacred woman” or “the undefiled”, academic translations have nearly always used the term “prostitute” to describe these women and the term “temple prostitution” to depict the sacred acts of worship that occurred.

In later patriarchal times, these holy women become the whores of Babylon depicted in the Old Testament who were reviled for their shameful practices.